Where Did it All Begin?

Well, if the back story to this project is interesting to you, then read on.

Okay, so, for a long time there’d been a recurring theme in my life. Every time I came to to a new crossroads, I’d start seeking for something. I wasn’t exactly sure what it was. Something to fill me. And one day I realized, I was constantly seeking for HOME.

I was raised with both Jewish and Christian beliefs. I definitely struggled with religious dichotomy. But being a spiritual and curious person, I was always very interested in the meanings of things – why we are here, and who I was in relation to God – and what God was. Or if God was.

Seemingly unrelated, I also grew up in the apparel industry. I worked alongside my Christian father as a pattern cutter in downtown Los Angeles, and I was doing this from a very early age. Eventually, the materials from the garment manufacturing trade crept into my artwork, such as the patterns themselves. Though I had spent so much time around my dad, I grew up to identify as a Jew. In my visual art, I began arranging the paper patterns on my canvases  into Hebrew letters in some of my paintings. I did not know how to speak any Hebrew, but I liked how Hebrew letters looked aesthetically. Working with them, I wanted to learn what meaning was behind the letters, as I was a seeker of existential concepts and knew each Hebrew letter had a deeper meaning in Jewish mysticism. 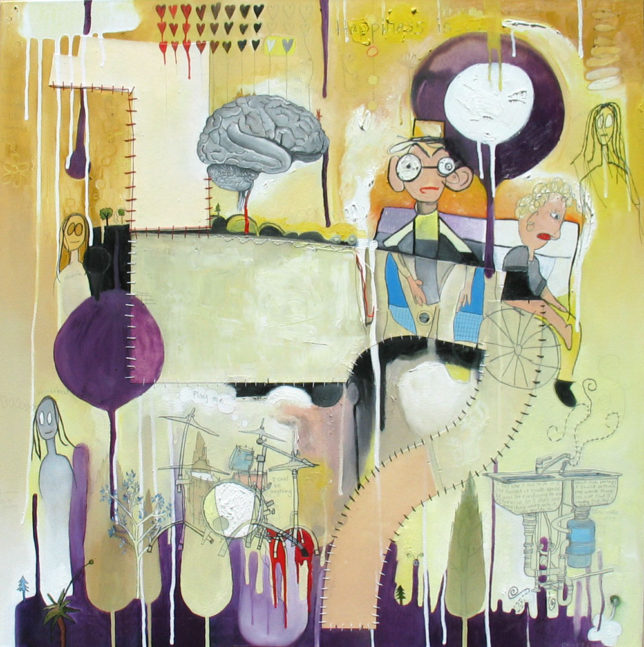 As an existentialist, I’d already embraced the idea about how individuals can bring about their own significance and meaning to their lives – that altruism, or “static truth” were in fact fluid. This concept brought me to a place where I could make better decisions and accept them, and/or, dismiss them.

Anyway, I know all this might sound a little strange and flighty, but if you knew what I had been through decades before I became an existentialist, you’d understand why I came to soothe myself with these ideals.

A few years after I came to embrace these views, both of my parents died. That’s when I managed to get myself into a painting slump. It was hard to create, or do anything for a long time.

Then I wound up collaborating on an Artists’ book with Chance Press, a small, independent press in northern California. I decided to take 10 days to do all the artwork for the book while retreating in Joshua Tree.  I rented a secluded home against the west entrance of Joshua Tree National Park. The house even came with a detached art studio. Between the house and the surroundings, I must say, I felt right at home. The artist’s book was called, Scribbles in a Sandstorm. 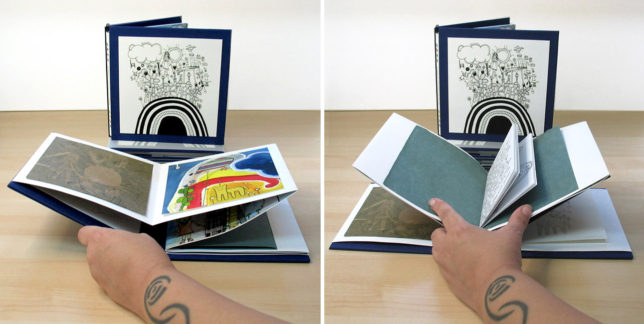 About a year later, I was looking to find my voice solely through the paint itself – no collage, no embroidery. Just paint. I came back to the simple black line. In order to find a new line, I ushered in the help of artist consultant, Ellie Blankfort, who gave me specific exercises to strengthen my abilities and confidence in drawing. She was an immense source of guidance and support for me. Without her, I probably wouldn’t have created the body of paintings entitled, This.

It was around this time when I also began going to shul. The truth was, I was seeking for a synagogue since I had moved from San Pedro to northeast Los Angeles, and I finally came across this article in the Los Angeles Times that interested me very much. It just took some time for me to actually step foot inside the building. Doing this alone without a family was very difficult, and rather sad, but the longing to connect to a Jewish community was becoming stronger than my fear. 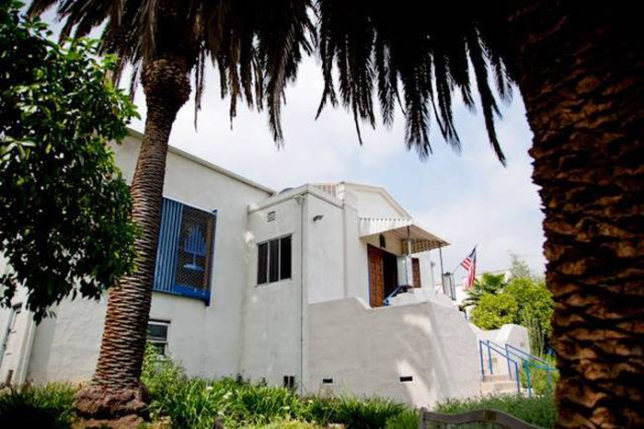 The night I walked into this place, I felt like I was HOME, and I’m now a proud member of Temple Beth Israel. From there, my interest in Hebrew was thoroughly rekindled and I took classes, albeit beginner classes. I’m still learning as a matter of fact, and it seems like it’s taking forever for it all to sink into my thick head, but what’s important I think, is my interest. It’s this interest that sparked my idea for this project.