What have I learned about Chet today?

Well, I learned that it is a Zayin and a Vov linked together. Do you see it? And remember that vertical line that goes up on top of the other letters that represent God? Well the same applies here, only there is something a little bit different, because you can also write a chet like this: 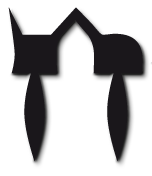 Weird, huh? You know why that is? It is because of the concept of “Touching but not touching,” Also known as hovering. No, not Hoovering – God is not a Vacuum! Well, maybe he is.

I mentioned this back when I was talking about the Aleph my first day out here in Joshua Tree.

In Kabbalah, Chet represents The Life Dynamic of Run and Return, meaning that there are these two levels of life: “Essential life” and “life to enliven.”

Think of God as the “Essential life,” of course. What else would he be between the two? Duh!

Something like mortal reality would be the “life to enliven.” Do you kinda get where I’m going here?

So, the letter Chet is the secret of “run and return.” It’s how God hovers over his creation, touching, but not touching, and all the Jewish souls connecting their lives that need to be enlivened with the essential life. It works two ways.

That’s what I got out of it anyway.

And not to say that this is what I got out of the letter/my studying at all, But it got me thinking.

Very recently I lost my beloved aunt Susan. She had cancer. At first, it was diagnosed as breast cancer, actually Stage 4. That’s when they found it, so it was pretty bleak.

She went through super aggressive therapy, five rounds of chemo, back to back, during which time she told me several times, she was not afraid to die.

I was actually just writing about it this morning. I have been thinking about her a lot.

She was serious. She wasn’t trying to convince me, or herself, God or the universe. She really wasn’t afraid. I believed her. It wasn’t easy to believe, but I did. For her, she was ready for the outcome, whatever it was. She also had a strong belief in God. I wondered if that had anything to do with it.

I know people who have a very strong belief in God, but they are still scared to death to die.

I am basically scared to death to live. I will admit to it. I live my life in love, but I have to say, I’m afraid of everything. I live in fear. And while that fear motivates me to conquer it constantly – for instance, if I am scared to fly someplace alone, I’ll go do it just because I’m scared. If I am afraid to expose my weakness to strangers, I’ll show my vulnerabilities to anyone and everyone just because I fear it most. I’ll walk on fire because it scares me. I’ll make that line on the canvas because I think it’s stupid. You get the idea.

I do this because I desperately want to stop living my life in fear, and you know what, nothing works!

So I wonder, sometimes, if death is it. Is death the moment in time when I will finally “let go?” Where the anxiety of life finally leaves and you feel like you are falling back into a fresh, Downey pillow, with TRUST? Maybe then it would be something to look forward to. I wonder if Susie was not just unafraid, but if it was something like a relief she was looking towards?

Anyway, I wonder about these morbid things a lot, in case you can’t tell. I know I should not, but I do.

Maybe she knew there would be no more “hovering” from God, no more running back and forth. No more effort. Maybe it’s when God stops barely touching and finally touches you.

Just a nice, shiny thought to brighten your day! 🙂