For the next few days while I am at home, I am going to be restudying a few of the letters, Tet being the main one, then Yud, and then I want to re-cap on Chet, before I finally study Kaf. 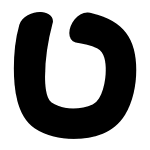 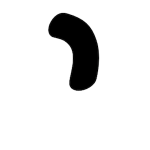 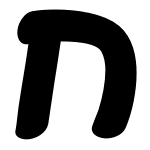 This is while I get my bearings together, see to some pressing personal matters, and just get reorganized, so this Kabbalah will be sporadic over the next week – just warning you.

I would just like to take a HALF WAY break to work on some rewards!

Remember, I have a LOT of rewards to complete, and most of those I’d like to do before I enter into my painting trance. I really don’t want to be preoccupied with much.

Check this out. Even though I had, what, 58 backers? I have 91 things I have to hand make — in some capacity or another. That might be hard to believe, but it’s true! It’s because some rewards had more than one thing listed in a particular tier.

That being said, one “thing” can be anything from writing a personal post-it note (easy!), to making a custom, hand bound artist book (not so “easy”).

This morning I was stitching the edges of Dan on one of the two Danvites that a couple people chose as their reward. The ones I had left were not finished, which is why they were left blank I suppose. In fact, I was looking for a finished one and I can’t find one! That’s a little alarming to me. It must be in my box of “Show Promo,” or something. 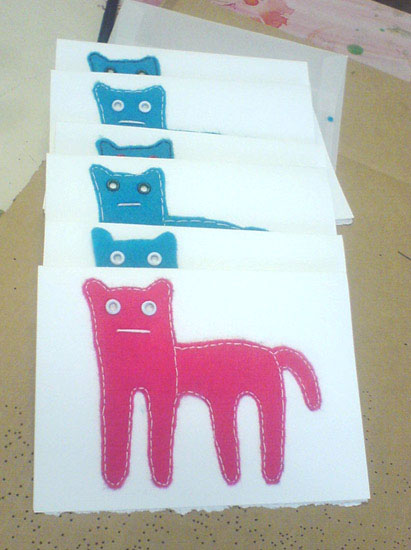 I sent these out to VIPs before my last solo show in 2010, It’s Mostly About Me and Much Less About You that included over 40 paintings. Probably half (or more) were from the Dan series. It’s a calling card of mine, or whatever you call it, to send out something a little “different” to selected people on my snail mail list before one of my solo shows, as well as an invite/postcard in order to get a bit more attention. You know, like a baby. A baby shaking his rattle really hard and screaming his head off. Like that!

“Give to me your attentions! My art is on view! Drop what you are doing! My art is more special than the the other art you have seen!”

Maybe you try to mix a perfect fragrance and line the inside of the envelope with it, hoping it will lure them to your gallery. Kind of like those cartoons where that luminescent, stretchy fragrance snake brings your unwitting prey up from under his nose and floats him back to the source of the smell.

Whatever it takes, right?

I just try to make something the person on the receiving end will notice – that someone may have made it by hand and thought went into it. Maybe they’ll be reluctant to throw it away. I want them to keep it, even if they don’t go to the show. Over the years, I have found that many of them have kept these things. Maybe they will remember my name at least.

Anyway, the rewards… Of the 91, so far I have only made 29. I haven’t sent out most of those 29 yet because I am waiting on the Dan stickers that I decided to give to everyone over the $20 mark. I am just not getting them until the end of next week. 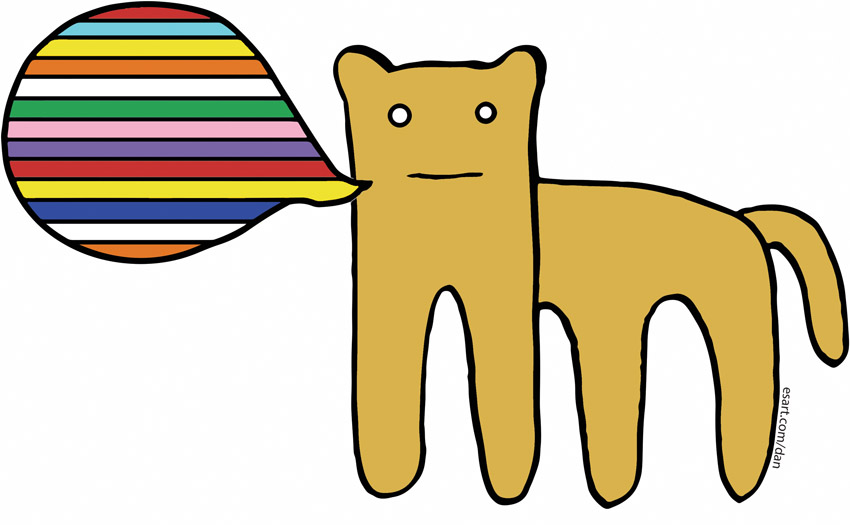 The first rewards I did were obviously the postcards because I had to do them from Joshua Tree, so I hope everyone got them by now – including Quebec? I sure hope so. I think I wrote my best one there. I sent your guys’ wristbands out today and added EsArt stickers at least.

There is obviously – well – I shouldn’t say “obviously.” Maybe it’s not so obvious. How would you guys know it was obvious? Either way, there is going to be at least a three week delay on everybody’s rewards. When I wrote those estimated times for people to receive their rewards, I just wasn’t thinking clearly – like about how I had to wait to get all the funds into my account, ordering times/shipping times for the stickers and bracelets, plus proofing them! (I had to make changes multiple times on Dan’s color, and the Hebrew on the wristbands.) I also wasn’t so sure I was going to Joshua Tree so fast. I just didn’t take a lot of things into account! So please forgive me if you do not get your rewards exactly on time. I would push everything up another month, two if you’re a sweet and understanding individual.

I am also waiting on:

I am really excited about the paintings I am about to make. What’s weird is that you are going to be seeing them unfolding. I don’t even know if I like that part. This will be weird. I’ll be doing a lot of double posting on my esart blog, and please forgive me that these entries are showing up multiple times on Facebook and G+. I have to make my settings square so that they only post once. It’s because I have my Twitter already set from Facebook to post there… but now WordPress is setting to auto tweet… I have to fix all this shit. I apologize.

But what I was saying is that you will see a lot of the preliminary stuff, the notes, some of the sketches, and how I work and I’m sure it will seem really rough and weird, maybe in some people’s eyes too rough, but it’s how I work.

Most of the work really happens in my head, and I will maybe make a few drawings, some rough, some with color, some watercolors, and some may not seem like they relate and I think it’s because I have several directions of where I want to take the concepts in my head. I am exploring how I want to work with them.

Like this… These are essentially the same thing (to me). It’s just the difference in how I want to go about them. 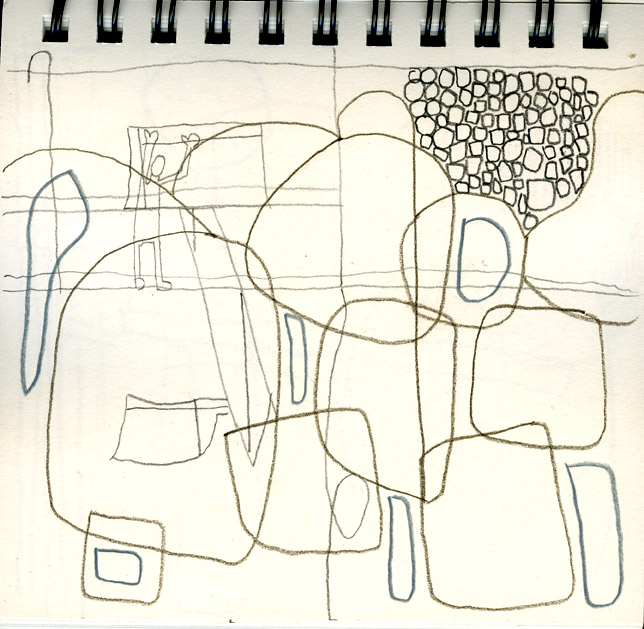 Sorry for the quick and crappy scan, but this above is the same exact concept as this one below. 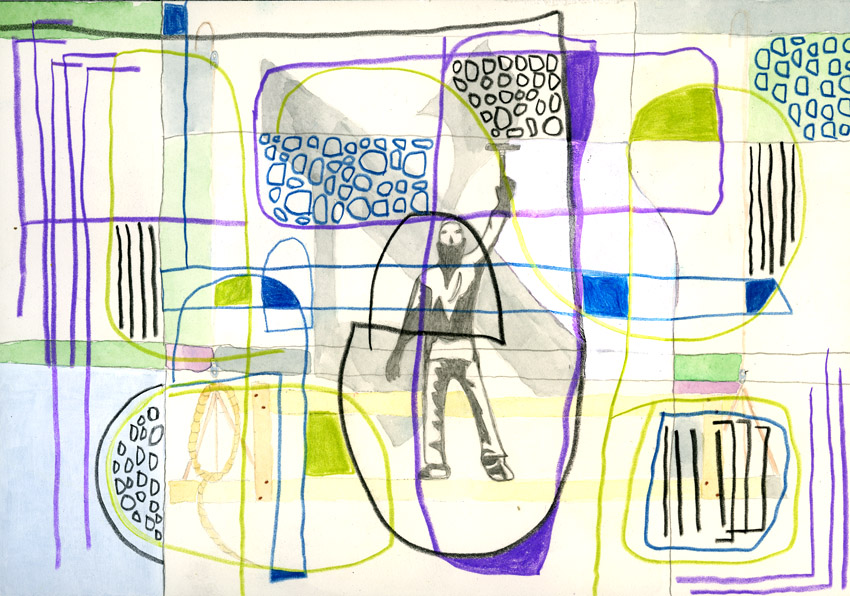 And I won’t play for very long with the kind of thing in the second one, unless I want to go in that direction.

Then I would simplify that window washer guy until he was well rendered with the least amount of waves/wavy lines (but not angels lines), just less — and I may still do this, I am thinking about it — just so he is recognizable as what he is without him looking “real” or illustrated. So I’d probably fill a small sketchbook until I liked him in a variety of positions.

But let’s say I don’t go with this way. Let’s say I go with the top, which is how I’m actually leaning. In fact, I have practically filled that book since then. You’ll be surprised at what the last sketches actually look like now.

I’m scared to show you. So I’ll show you tomorrow.