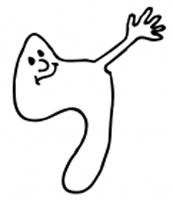 Now I know! I really needed to read tet, then skim yud – not really get it, then, read it again.

And now that I have thoroughly studied yud again, it is hitting me over the head like a ton of round-ish bricks.

I would have never discovered this properly had I not gone through this the way I did, so a big shout-out to my bowl of Wheaties this morning. 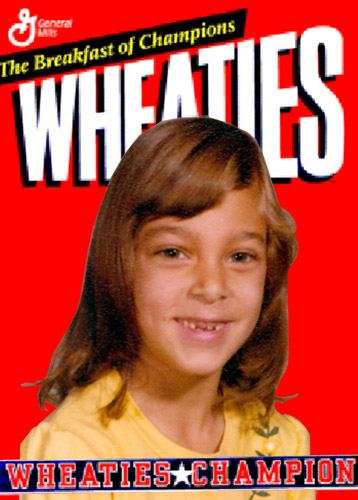 The letter Yud, titled, The Infinite Point opens like so:

“The letter yud, a small suspended point, reveals the spark of essential good hidden within the letter tet. Subsequent to the initial tzimtzum, the contraction of G-d’s Infinite light in order to make “place” for Creation, there remained within the empty void a single, potential point or “impression.” The secret of this point is the power of the Infinite to contain finite phenomena within Himself and express them to apparent external reality.”

In fact, the book then goes on to say:

To me, this comes back to physics again. This isn’t just luminous light through a prism. This is Radiant Light (or Radiant Energy) and that works more like an electromagnetic spectrum. If you read a little bit about this, you might see how this correlates.

I’m not going to get into real proof of anything here, like some magic trick or a long formula that looks like π. It’s proof for myself here really. I already believed this stuff – instinctively. Nobody can really “prove” the existence of God. That’s not why I’m here. I’m just happy that I’m getting friendlier with my own feelings about it. (It.)

I’ve always had my suspicions that everything went back to The One. And that One consisted of nothing. That nothing just needed something to put Its life force into. In order to do that, It needed to create Itself as various dimension points, which in turn, would get the whole ball rolling to create the rest of the physical universe as we know it – laws and all.

The whole thing could have happened as fast or as slow as the Big Bang, since “fast” and “slow” are irrelevant, especially that “early” in the “beginning.” All the quotations because, you know, since time is just a point of view. In essence, a lie.

In the reality that you and I know, it is the consideration of an object moving through space: the time it takes to drive from my house to yours. See? Maybe not. Or maybe so. This crap is probably a lot simpler than I give anyone credit for.

So, if we all go “back in time,” I guess we’d be left with just The One. And since It split Itself into zillions of dimensions, stars, focal points, light sources, spaces, distances, and a plethora of other peripheries of some types of communication (Adam and Eve notwithstanding), then It/He/She is hidden in ALL of us. The One is all of us.

Yaye! we are all connected! Wait, ewww. Ha ha ha. Even that guy that works behind the counter at the liquor store? Yuuuuup!

I know tattoos are not looked upon well in the Jewish community. My mom nearly had a heart attack when she saw my first one. It is on my inner right forearm.

She just about died, but I had been wanting it ever since I was 18, and I waited several years after that before I did it because I knew not to be impulsive about it.

I’m about to turn 47 and I still have no regrets. I have a LOT more tattoos since then, especially up and down that same arm. But on my left arm, down by my wrist, is my only impulse tattoo. I designed it. It was very private because it reflected my spiritual beliefs, that I’ve mentioned above. It is a black spiral on top of my wrist, only the spiral is broken up. 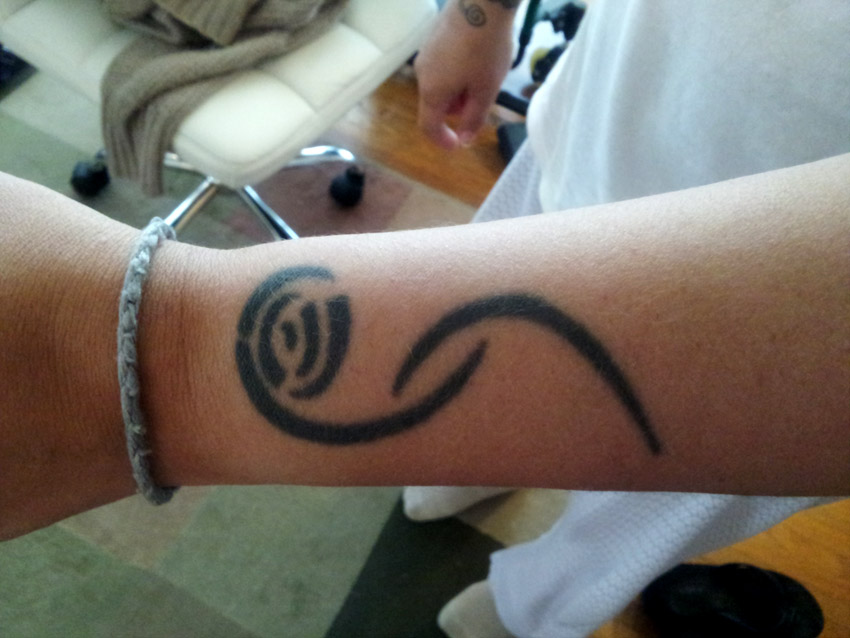 It was not until today that I am able to have a word to back up my design. When asked in the past, I just said something about how everyone in the world has to “find their way back to The One,” or “try to fix it and put the spiral back together again.” Something dumb.

People would say things like, “So you think the universe is broken?” “Why not tattoo a spiral that isn’t broken? Wouldn’t that be more positive?” Jeez, people and their opinions.

I’d say, “It will never be put back together again. That’s not the point!” or “We will never get back to The One.”

They would just think I was all the more anti-positive. Which I am!

It was just never easy to explain it so I resorted to simply saying that it was “personal,” because it is!

Now I look at it and it kinda looks like a yud! Doesn’t it? I don’t know. Now I think it does.

Anyway, now I can say that it means Tikun, which in a nutshell means: to repair. But Tikkun Olam is even better! <–Please click on that one. It’s really nice. 🙂

Okay. Have a nice day, OR ELSE!

Or else I’ll hunt you down and I’ll fix you.