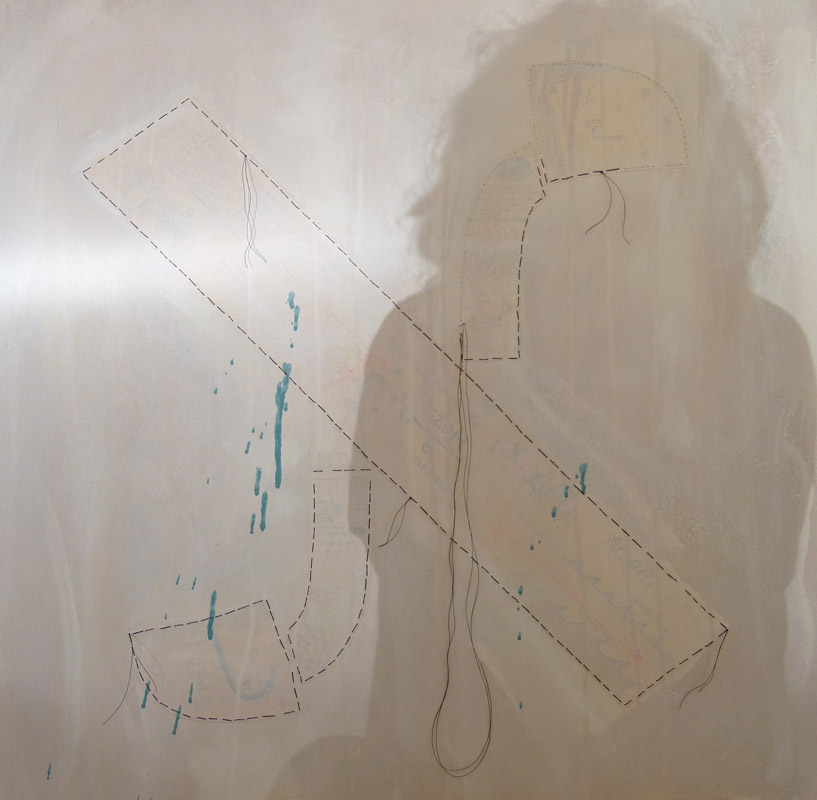 I am still working on the alef piece, which isn’t going to be called that. I’ll think of something eventually, but I put a couple more thin layers of white on it before I began to finish stitching it all up. 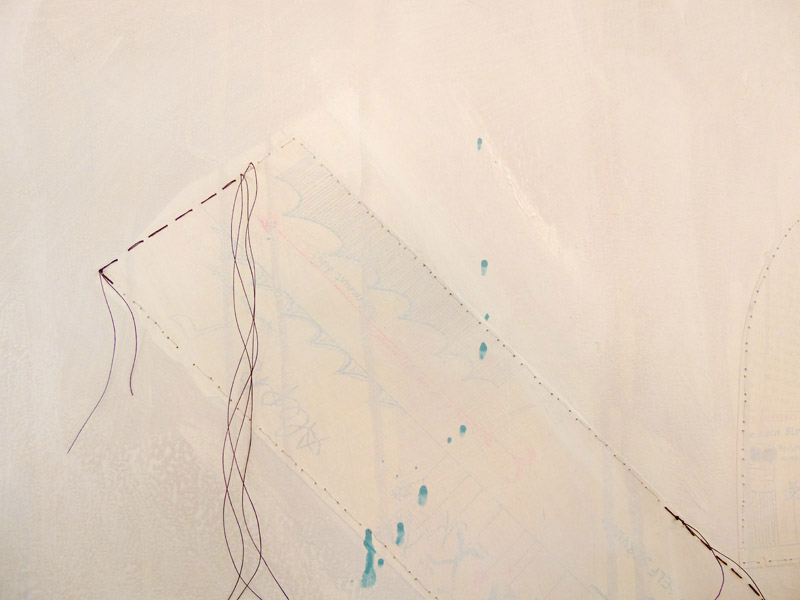 And then the back. 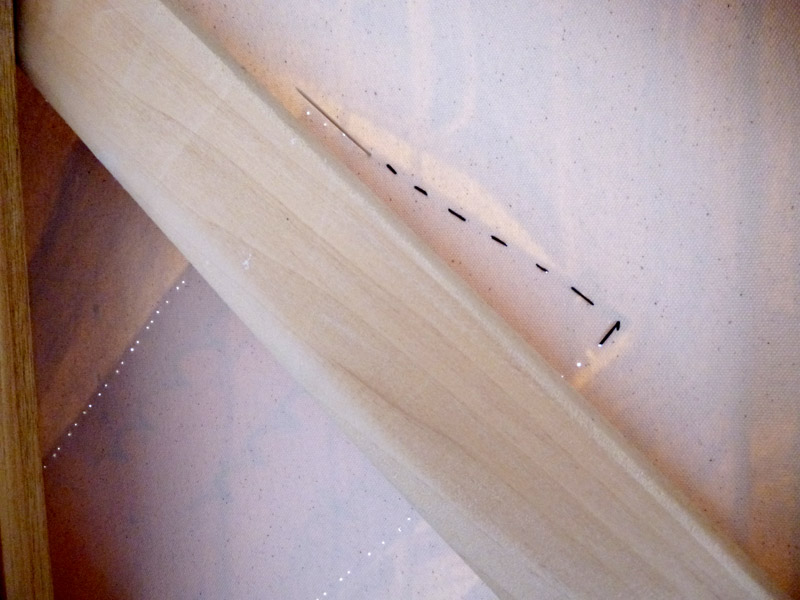 After I sewed the edges of the patterns (which is where I think we last left off from) and, by the way, there’s quite a bit of waiting time between these layers of oil paint… 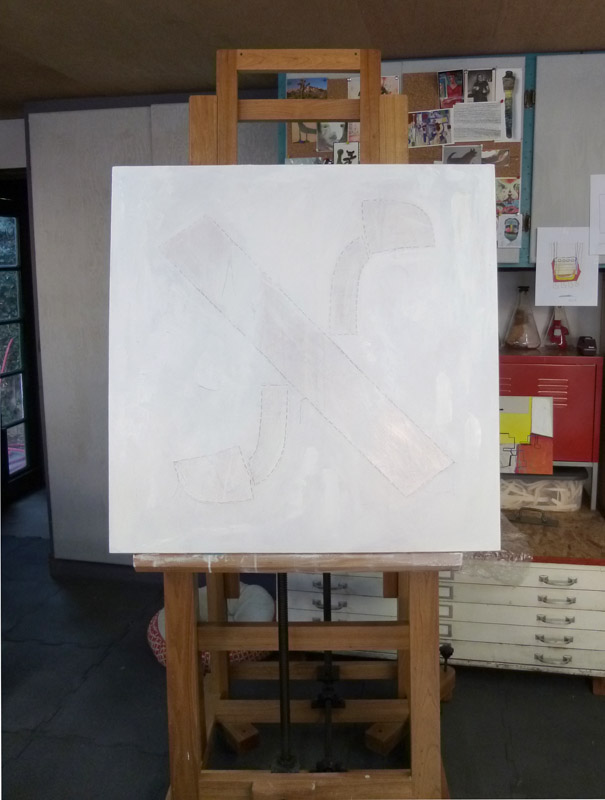 I finally started the very basic composition on this with some oil pastels. 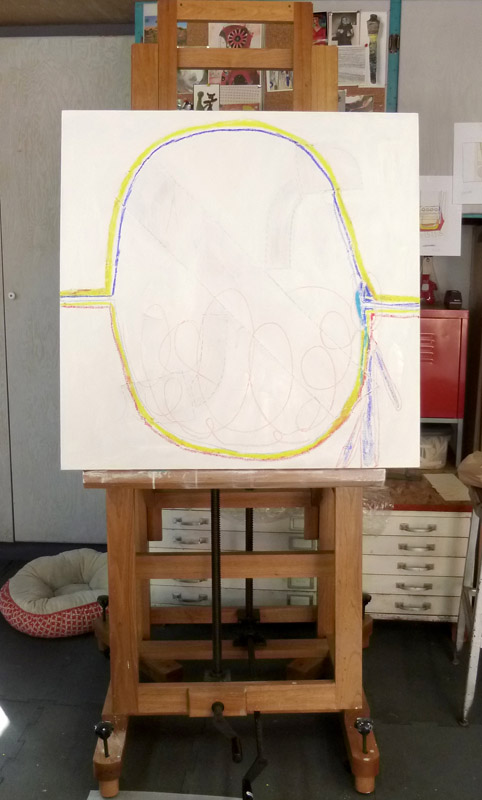 From here on out I’ll be painting color and blending — all the funnest parts, and the most crucial parts too. It’s like perfecting mark making. Or trying to anyhow.

And here is the last shot of it from yesterday. I’ll be adding the blues tomorrow. 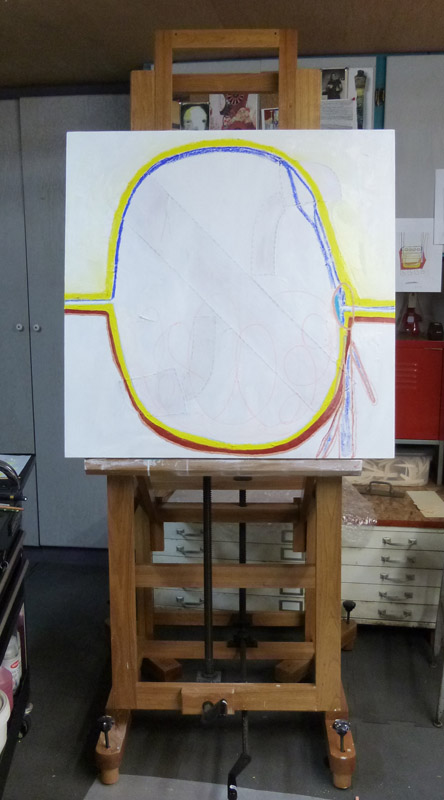 At the same time, I have been working on rewards. And as I have said before, I have more pieces of art than I have people to reward (some people get multiple things), but I am now glad to say that out of  58 people, I only have 16 more people left to reward. I got a lot done in a couple of months actually.

I am also working on two other paintings. I know I said I would be working on the largest one next, but I just barely started “Tet” – a 20 x 20 inch canvas, and a new abstracted landscape – a 16 x 20 inch canvas: something completely new and experimental for me!

I have absolutely no idea if it will turn out the way I dreamed, but we shall see. I’ll keep you posted, but you can not see it in progress images on it. However, if the experiment works out as planned, then perhaps I’ll let everybody in on the next one. How’s that? Sound like a deal?

I will be taking a few progress shots of the small “tet” piece soon, but we won’t be following it as closely as we have with the alef painting. I don’t want to bore you all. I’ve only slopped some acrylic paint on the 20 inch square canvas, and cut the pattern pieces that will form the letter tet shape. 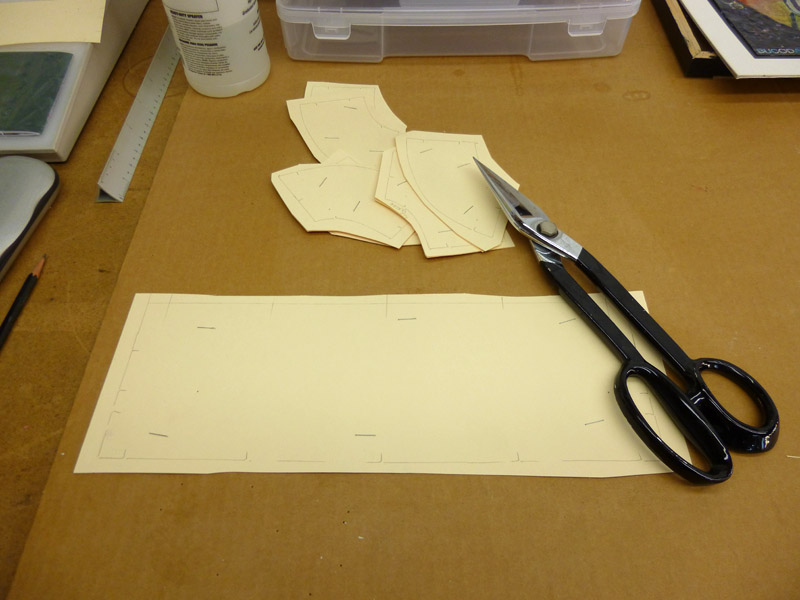 I cut these patterns with the same shears I used when I worked with my dad back in the day. Then they get notched before the staples come out. After that, they’ll be ready to become Journal drawings.

All that so they can be stuck to the canvas to be mostly covered in paint. Why? Why, oh why?

I guess because of the significance and the fact that I want them to subtly show through, but not so’s you can read or see them exactly. I like that look.

I know, I’m weird. That’s a lot of work for something that’s going to be covered up. I suppose I shouldn’t write anything too serious on them, right? ha!

The thing is though, it’s a good way to bury my secrets into the paintings. It’s my way of putting blood or guts into them and no one knows what in there but me. You might be able to make out a work here and there, but you’d never be able to see the whole thing. They are like whispers from ghosts. A child ghost mostly.

And the main significance. Well, I can tell you. I can tell you the significance to all this if you want, but I am such a big advocate of all of my art being for the viewer’s interpretation. Even this work too. I always feel like if I tell viewers what it all means to me, it’s like taking away their meaning and I don’t want to ever do that. My meaning and your meaning are never in conflict! My art means what you think it means. I’m serious.

But anyway, these Hebrew/kabbalah pieces are really about me leaving my past. I want to stop being so affected by my past and just leave it there – and live in the present. That’s truly my exodus.

It was the purpose of my meditation in Joshua Tree, the studying I’ve been doing, the process behind these paintings, and the new compositions on top of the Hebrew letters.

To go on (and on), The Journal pieces that make up the letters on the painting are like my subconscious interpretations that I gleaned from my studies from the letter and what the mystical significance means to me on a personal level. And since they are totally unplanned, a lot of cognitive experiences happen while I’m making them. I never know what I will write or draw on those patterns.

So all of this kabbalah significance has gone into the support of the painting; the foundation for the main composition – which has more to do with my Joshua Tree experience. The compositions, in a nutshell, have to do with the giant rock formations near the National Park.

Maybe it was the meditating, or just where my frame of mind was at the time I was there, but those rocks are so big, and I felt so small in comparison. There was just something about that. Something spiritual and humbling.

In the alef painting, specifically, if you go back to my first day in Joshua Tree, I was studying this letter and I had a lot of realizations about the Firmament as it could be applied to the Exodus with Moses and the burning bush. Maybe it was far fetched, but I have not stopped thinking about it since the first day I was out in the desert.

Anyway, as it applies to the Firmament – this is how I chose my basic palette for the alef painting. I probably could have made the darker water on the bottom instead of the top, but it looked better to have a cobalt blue up top alone with the yellow, and then I’ll be mixing a turquoise blue into the bottom half of the rock formation.

Okay, I just erased about two paragraphs on even MORE significance on this color palette, but it was so biblical that I just couldn’t stand just how biblical it was. So I’m going to end off here before I embarrass myself even further.