It only took May, June, July and half of August to figure it all out, but here I am, ready for take off. 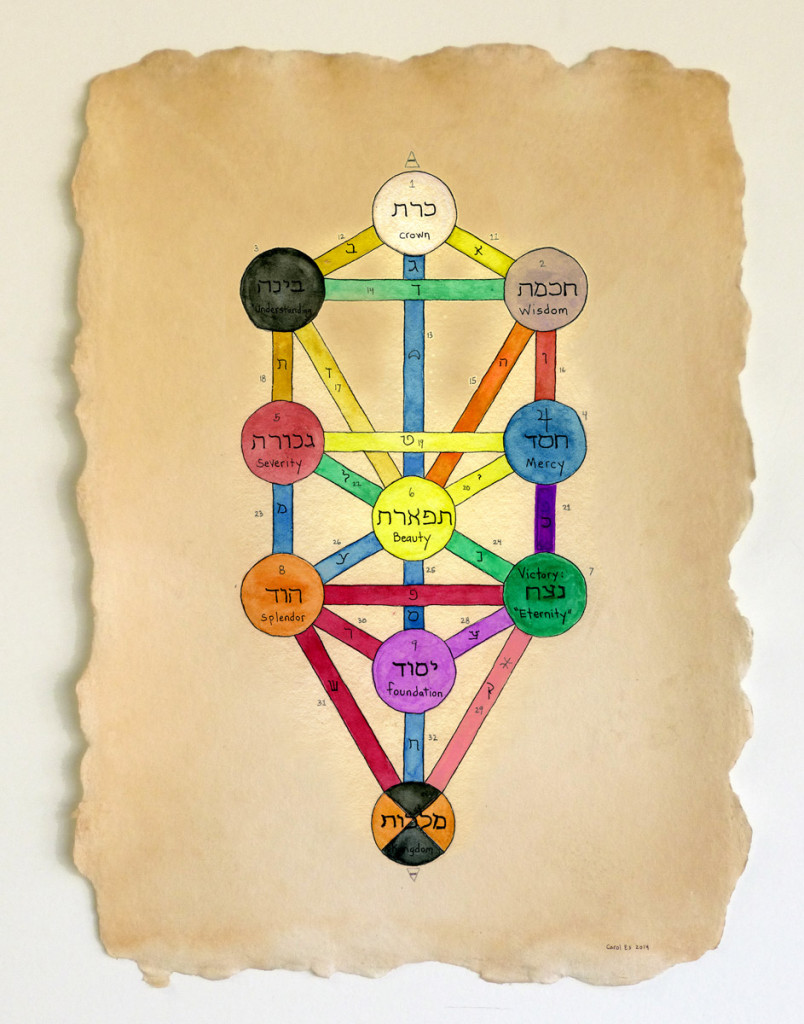 I suppose three and a half months of creating and experimenting isn’t too much time in the large scheme of things, except I could have done without all of the tumultuous stress and loss of hair.

At first, I really though that the Kabbalah Paintings were going to lend themselves perfectly to the show in the spring, and maybe they would have. I came to realize that it really didn’t matter what I made as a result of my time in Joshua Tree, that would be the perfect thing.

What I didn’t know then what I know now.

Isn’t it always this way? Hindsight, 20/20, retrospection, afterthought, recognition, anamnesis, backward telekinesis, all that. We are so much wiser looking back. Just like how you can get all the right answers watching Jeopardy during a rerun. I love when that happens.

Anyway, back to boring old art.

Since the day I came back from Joshua Tree until, I’d say mid July, all I was doing was working on those Kabbalah paintings. You saw me. I revealed every bit of it on this blog, especially the first one. I talked about how I was doing it, what was going on in my head, and all the significance behind the colors and composition.

It was loaded with a lot of stuff.

The fact that Firmament (the first one) is going to be featured as my cantor’s album cover is a major honor that I am absolutely over the moon about! Still, I was honestly starring at it every day, thinking about changing it. It had undergone so many changes, maybe more than any other painting I had ever created, which goes to show you that my confidence was somewhere in the underground sewers of Los Angeles.

Meanwhile, I was working on a few more…

And I started also working on some watercolors of the sefirot, as pictured above. Those were a no-brainer. I love them and I don’t have any “doubts” or mixed messages about doing them. I feel like I can make as many different versions of that as I can think up, or as Kabbalah has meaning. It’s endless.

But then, as you may or may nor know, I got a wild hair up my butt to start doing some abstract landscapes that began to tear my world apart. It drove me absolutely bonkers and took me forever to endure, yet I worked hours on it every day. You might not be able to see that in the final version, but it’s true.

I didn’t take a picture of it until I was some hours into it, but here’s a bit of the progress: 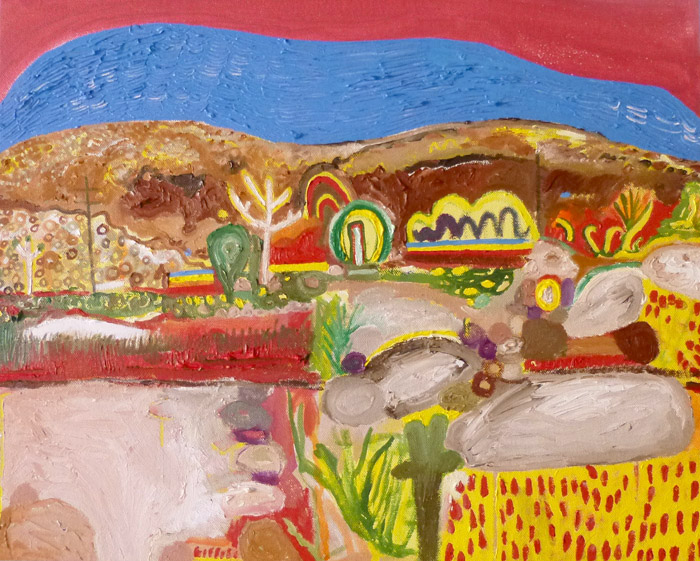 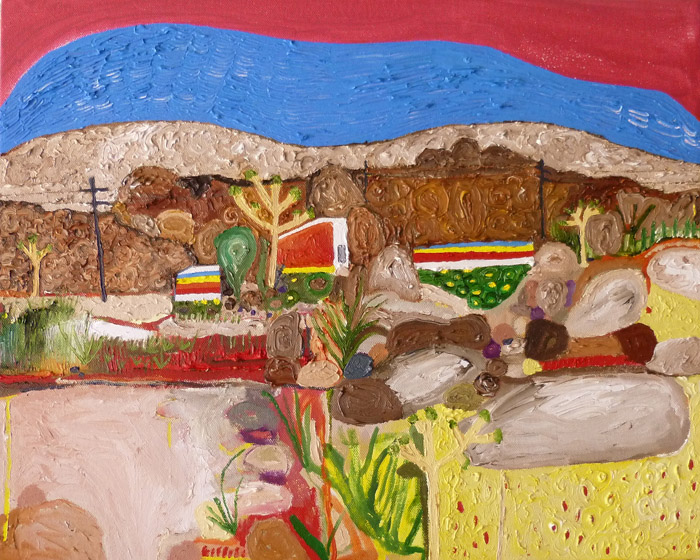 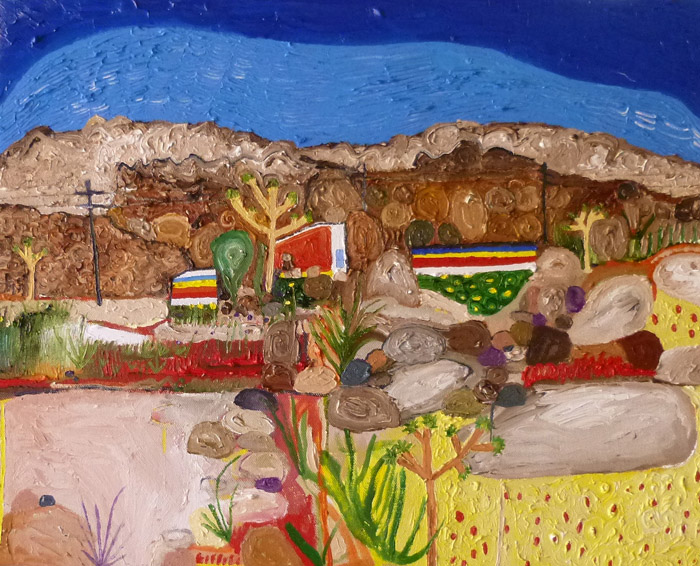 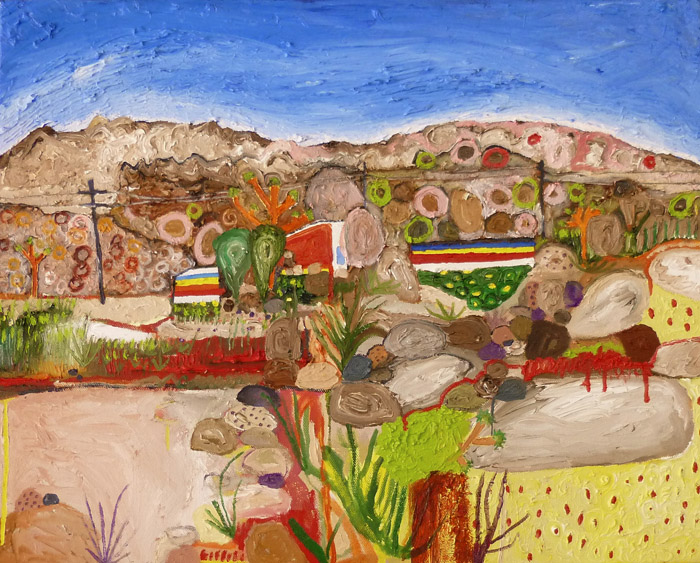 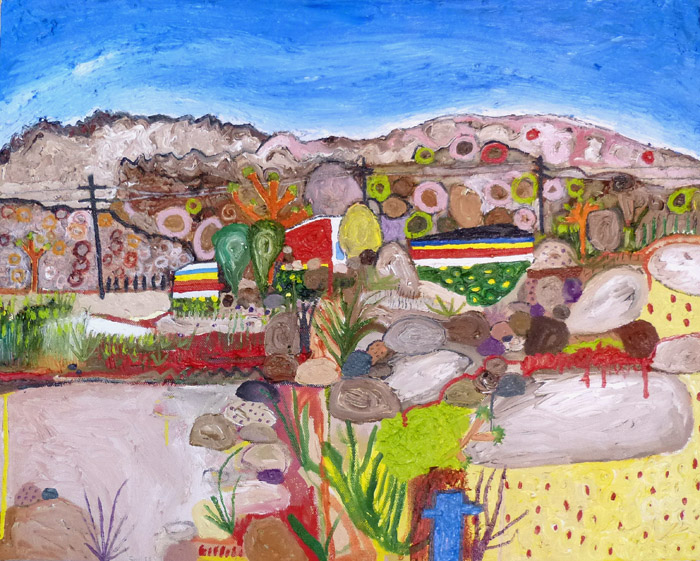 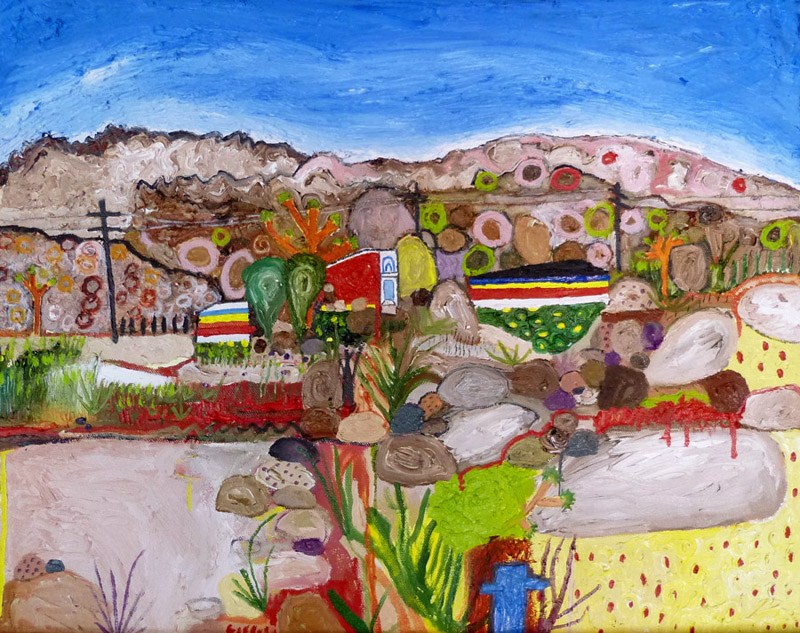 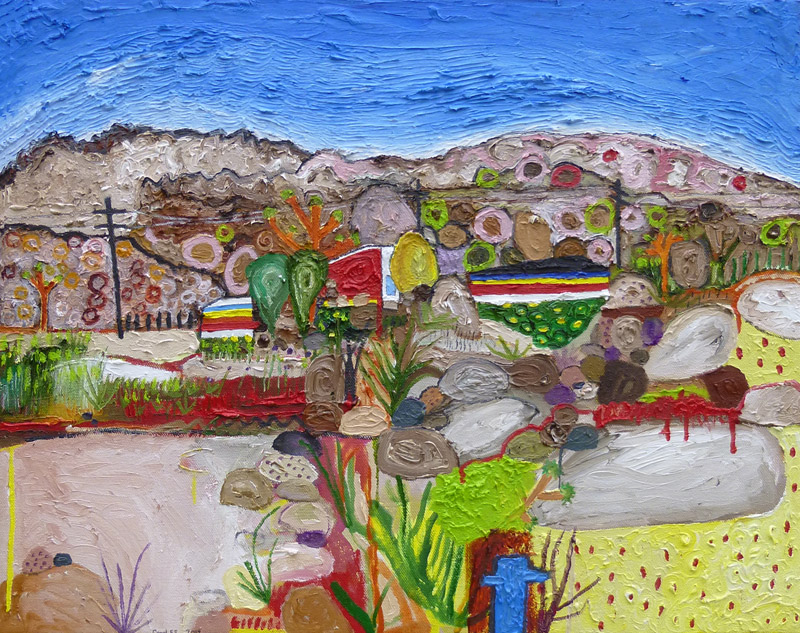 Even though this painting was difficult for me to get through, it brought me to a breakdown. No, I mean a breakthrough – about what I wanted to be doing and how I wanted to be challenging myself.

I also remembered that I had other things in mind regarding the landscape while I was in Joshua Tree. While I was snapping photographs it didn’t occur to me until I finally got all my film developed, which came around the time I was finishing up the above painting, that I had this other idea too.

I was walking around with the camera strap around my neck and sketchbook in hand with the intention of turning these sort of quick sketches: 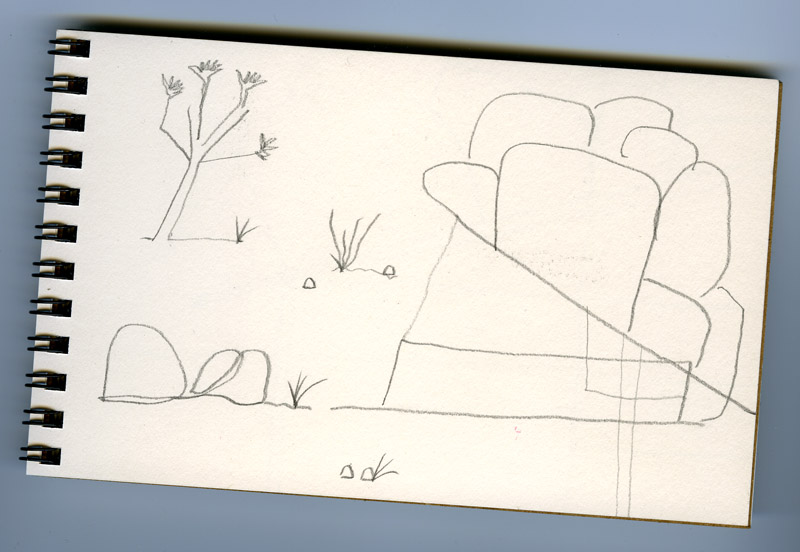 into these kinds of collage paintings: 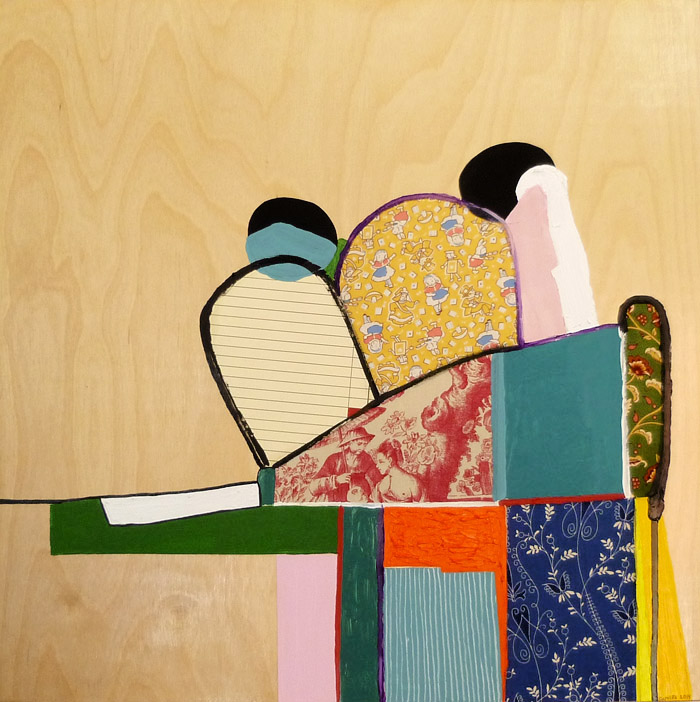 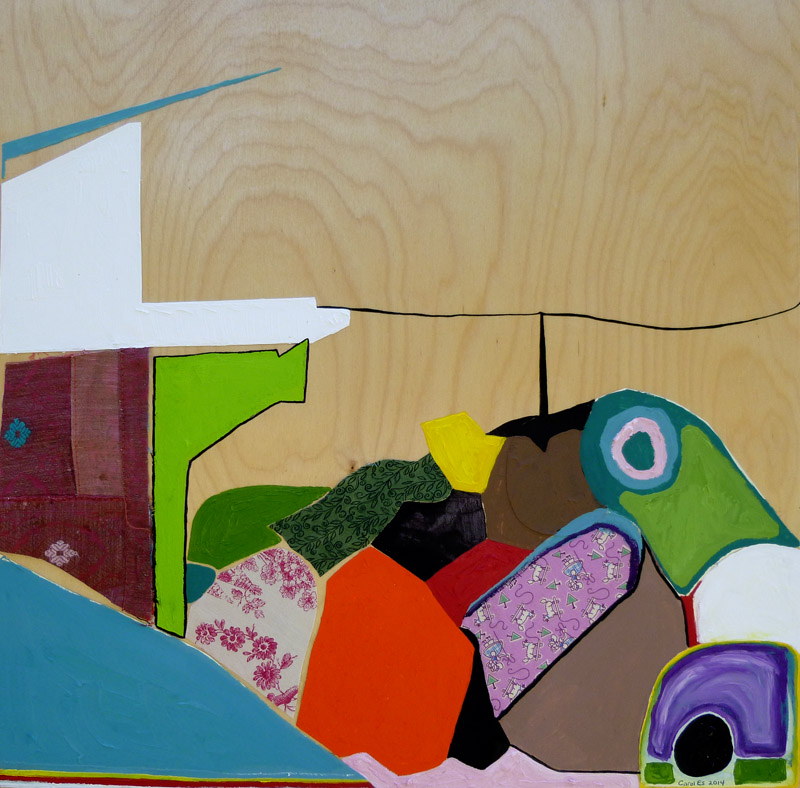 So I guess what I’m saying is that despite all of the studying I did on the Torah and Kabbalah, I can not deny my intense interest for the Joshua Tree landscape. I think it was what allowed me the solitude for my mind to open to be able to assimilate all of that kabbalah stuff.

And I am still studying it. Have I told you guys that I have been taking this very interesting class at my shul about the last kabbalistic tale that Reb Nachman of Breslov ever told? It is called The Seven Beggars. It’s fascinating!

I really wish I could impart everything that I have learned about kabbalah, but I am such a novice still. I have learned such an immense about of information – invaluable information – and I wouldn’t know the first thing on how to even explain it. And that’s not even me trying to be esoteric. I swear!

But that’s that, and I won’t start.

I have been working on a new landscape. Another one that will take me another lifetime, it will seem. I only have two shots of it so far: 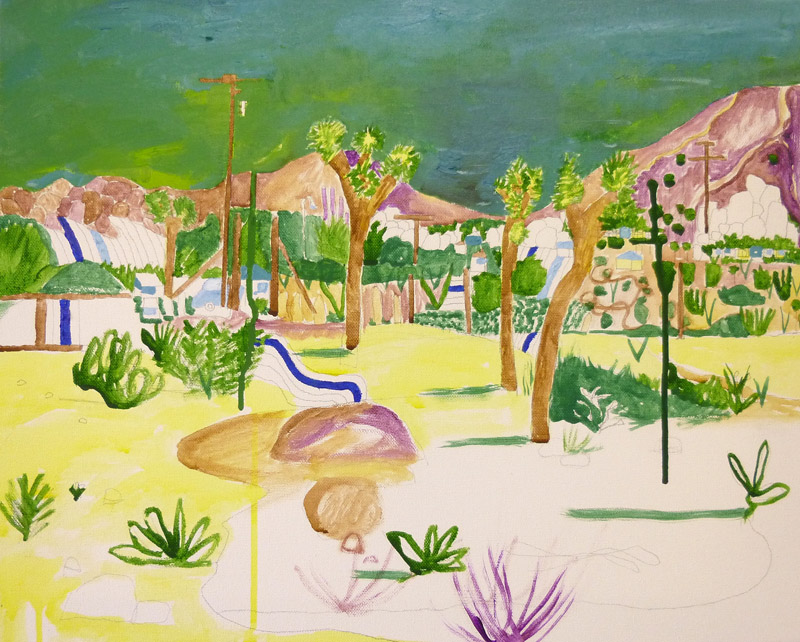 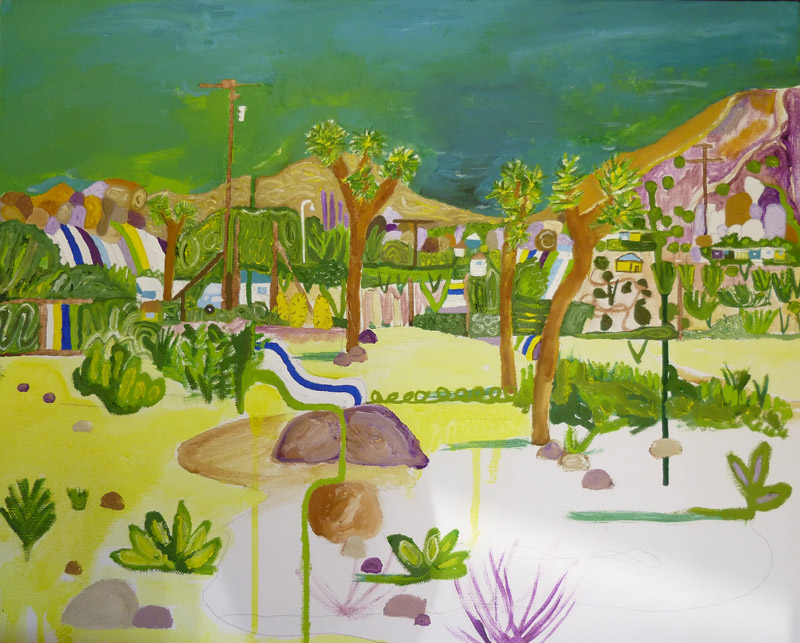 And what’s been my point in showing and telling you all this? Well, I am ready to finally take off into these directions of the landscapes. so much so, I even have more secrets up my sleeve regarding me reveling in this even further. I just hope I can do it!

I’ll tell you this, it might be biting off more than I can chew in terms of it being a painting challenge, but if I can do it, I think it might be the most exciting thing I have ever done.

I am worried that my deadline is the last week of February, giving me only about 29 weeks. Honestly, that’s about six less+ paintings under my goal since I originally imagined that I’d have another month. I was just looking at the way Shulamit’s schedule has been going for their spring shows and for the past couple of years, their spring shows open the first couple of days of March. (Now I wish I asked for a fall show.)

Anyway, I have no idea why I am blogging when I have work to do. Bye!